New story online: “A Void Wrapped in a Smile” at Basement Stories. A novelette! Meant to be a standalone, though also sorta kinda a Marla Mason story (though she’s only in a scene or two) — it’s about Joshua Kindler, a character from my novel Poison Sleep. (Thanks to Arachne Jericho for asking me to write a story about Joshua. I’m not sure I managed to make him sympathetic, exactly, but I tried to make him comprehensible.)

Speaking of Marla, Grim Tides made the front page of Kickstarter today as the featured fiction project. Sweet!

We got a final copy of the trade paperback of Briarpatch at A Certain Magazine today. Holy crap, is it gorgeous. I’m so happy.

Steven Klotz has the first review of my new novel Briarpatch, and it’s a very kind one. He’s been a big fan of my work generally, so it means a lot to me when he says:

This is my favorite Pratt so far and I’d recommend it to anyone who likes their fantasy mixed with contemporary reality, but is searching for something more (and weirder) than the typical urban fantasy.

You can pre-order the book at Amazon or Powell’s or a bunch of other places. It’s out in a couple of weeks!

After a month of Being Lazy, I’m gradually ramping back up to productivity. I wrote a story, and I’m researching a novel project, and I did copyedits for Venom In Her Veins. I’m about to dive in (ha, ha) to Grim Tides. (Speaking of, the Kickstarter fundraiser is running for a couple more weeks. There’s still time to sign up and get e-books, a chapbook, a sketch, signed copies, Tuckerizations… And if I break $10K, I’ll commission original cover art. Tell your friends! And your generous enemies. For those who’ve already donated, thank you! And I’m trying not to mention the fundraiser every day, so consider this me showing restraint.)

So that story I wrote: I did it mostly over the weekend, and it’s called “Ill Met in Ulthar”. About 7800 words. It’s a Marla Mason urban fantasy story that’s also a sword-and-sorcery story. It’s partly an homage to the great Peter Phillips story “Dreams Are Sacred” (which was simultaneously science fiction and sword-and-sorcery), and I name-dropped a character from that story to make the inspiration clear to Those Who Know. (I’m making it sound all esoteric and recursive, but it should be perfectly understandable even for people who haven’t read Leiber or Lovecraft or Phillips — I just put in some small markers to let my fellow hardcore fans know where my influences and inspirations came from.) Let’s hope the editor likes it!

I’ve muttered a few times about neat things happening, but I was stingy about details, because those details were still being negotiated. Well, now one of them is official! Here’s the announcement:

RAGS & BONES, edited by Melissa Marr and Tim Pratt, an anthology of short stories retelling classic tales that have inspired the all-star lineup of contributors, including Neil Gaiman, Lev Grossman, Kelley Armstrong, and Carrie Ryan, to Kate Sullivan at Little, Brown Books for Young Readers, for publication in Fall 2013, by Merrilee Heifetz at Writers House.

I’ll have a story in the book, too, as will Melissa, and several other very cool people. It won’t be out for a while — late 2013, I’d guess — but that just means you can have even longer to anticipate the book! I’m really thrilled to be doing a book with Melissa. We’ve wanted to work on something together for a while, and this is an awesome project.

Venom In Her Veins Cover

My good cover karma continues with this amazing art by Raymond Swanland: 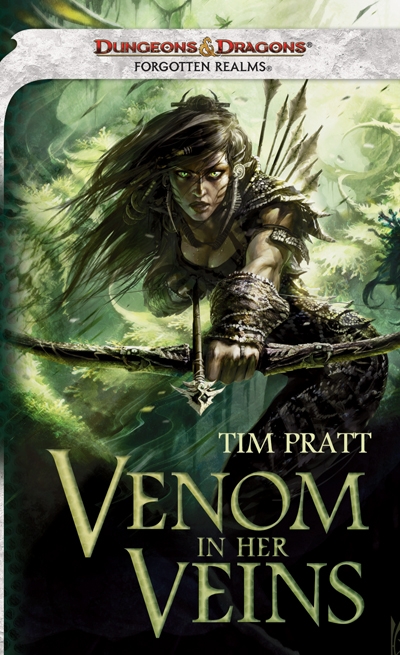 That’s my main character, Zaltys, who looks mostly human, but who’s got a bit of snake in her ancestry. She is an archer. She is even more badass here than I imagined her.

As I write this it’s 8:13 am in Reno on August, uh, I have no idea. (I doubt I’ll post it until tomorrow anyway though, so what’s it matter?) It’s Sunday, the last day of Worldcon. My wife is sleeping (she was out late at the Hugo Loser’s Party; she was the designated acceptor for Best Editor Long Form nominee Juliet Ulman. Shame she didn’t get to use Juliet’s lovely speech.) My mother-in-law, who came along to hang out with her grandson, is off having breakfast with the boy. It’s quiet in the room, apart from Heather’s steady sleeping breath and the everpresent exhalation of the air conditioner, so I thought I’d try to write a bit about my Worldcon experience, to nail down a few nice memories:

There were other nice moments, but those are the ones that stand out the most.

I haven’t seen much of Reno, having barely left the hotel, but I don’t think I’ll make a point of returning to see more of the city. I don’t have the gambling gene — nothing against it, it just doesn’t interest me, especially the ubiquitous slot machines where you’re essentially playing against uncaring Math itself. I could do without the cigarette smoke. If you’re not into gambling or smoking, there doesn’t seem to be a lot here for you, but again, I’m not the most educated observer.

This is my fourth Worldcon in ten years. Not that many, I know! I’ve only gone to west coast-ish Worldcons (San Jose, Anaheim, Reno), except for the convention in Boston, when I was a Campbell nominee. The one year I was a Hugo nominee, the convention was in Japan, my wife was VERY pregnant, and travel didn’t seem prudent, especially since I didn’t expect to win, so I didn’t go to the con. It’s not my favorite convention, honestly — a bit bigger than I like, though compared to DragonCon or ComicCon it’s tiny, I know. Still. I like a convention where you’ll pretty much run into everyone there a few times just by walking in the hallways, and Worldcon’s too large for that — there are friends and friendly acquaintances I know are here (I see their tweets!) that I haven’t managed to bump into.

This was a weird con, because most of my very closest friends in the field aren’t here; the people my wife and I tend to hang out with more-or-less constantly at conventions couldn’t make it for a variety of reasons. Which means we’ve spent a lot more time with people we like a lot but don’t know as well, and, you know, it’s been good! I’ve had conversations with people I normally don’t do much more than say “Hi” to.

I’m glad I came. But now I’m ready to vanish into fiction-writing isolation at home in Berkeley for a while, to emerge again at World Fantasy…

My son has been fascinated by arithmetic lately, doing small sums and counting them out on his fingers — two plus two is four, three plus three is six, and so on. This morning he independently invented subtraction: “Three fingers, take away two, you have, one finger!”

I helped him do a few subtractions, but he was somewhat confused about zero, so we talked about that a bit, with examples: “If you have one banana, and you eat it, how many do you have left?”

“And if you have two bananas, and you eat two, what do you have?”

He replied, very seriously: “If you eat two bananas, you have a tummy ache.”

Some people have said they want to donate, but don’t want to make a Kickstarter account to do so. Since I’m already funded at Kickstarter, it doesn’t much matter at this point — if you’d rather donate directly to me, I’m happy to accept, and I’ll make sure you get your prizes! (See Grim Tides kickstarter page for the prize list.)

(Click image above to donate by PayPal, or contact me if you’d rather send a check/money order)

Artist (and current Hugo Award nominee) Daniel Dos Santos has given me the go-ahead to post the new artwork he did for the upcoming Audible.com audiobook editions of Bone Shop and Broken Mirrors. (The audiobooks aren’t available for download yet, but rest assured, I will link them vastly once they are.) 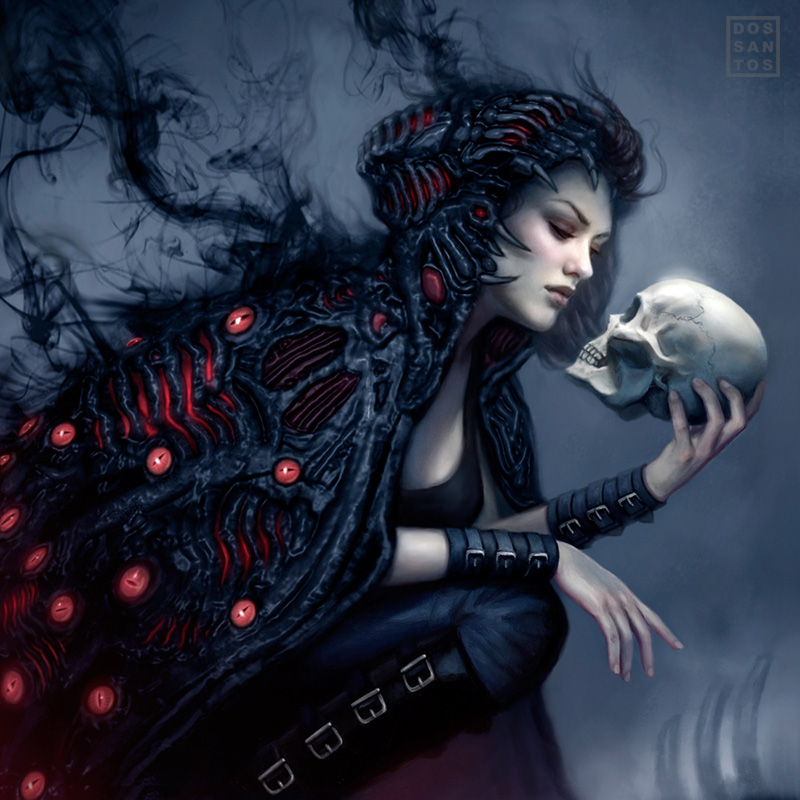 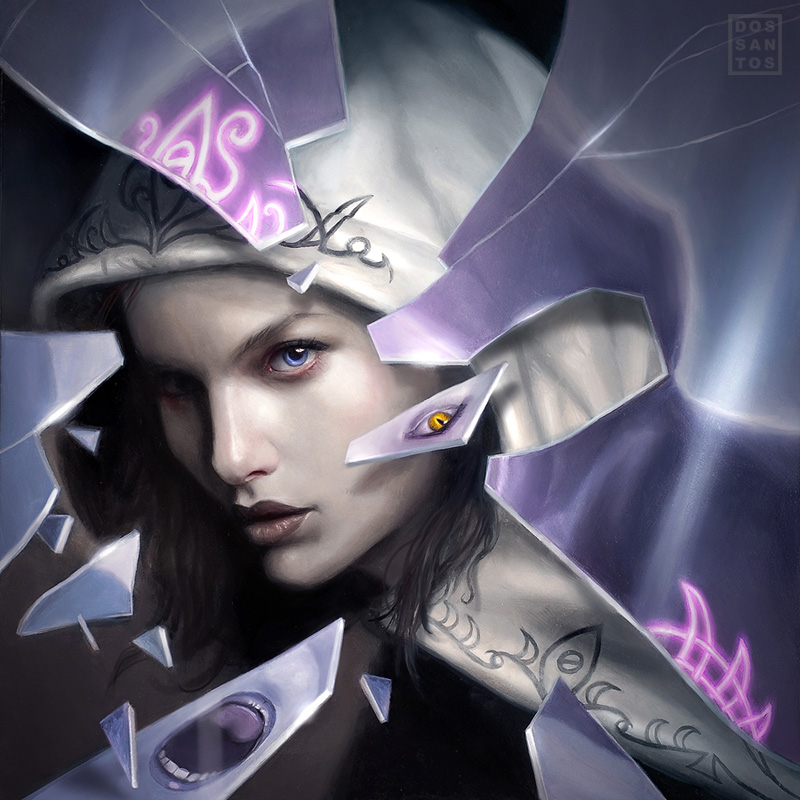 That Bone Shop image in particular will haunt my nightmares. In a good way. My thanks to Steve Feldberg of Audible for commissioning this cover art, and to Dan for painting them!

ETA: Dan just wrote to let me know his assistant Lindsey Look helped paint these (they had a short deadline, so collaboration was the only way to get them done). Lindsey is an awesome artist too — check out her work!

Yesterday I launched a Kickstarter fundraiser for Grim Tides, the proposed sixth full-length Marla Mason novel. I didn’t do an entry about it yesterday because I just didn’t have time — I was at the doctor with the kid until early afternoon (he got a checkup for his glaucoma, and everything looks great), then playing catch-up at work. I figured I’d tweet about the fundraiser and write to my mailing list of past donors on the first day, and just do a journal entry on day two.

The fundraising goal was $6,000. (Not an entirely arbitrary number; it’s about what I could get for doing another work-for-hire book or pseudonymous novel, so it was the amount I needed to justify writing a Marla book instead of chasing down another job.)

I got fully funded in just about 13 hours. So the book is definitely happening; I hope to begin serializing chapters very early in the new year.

The fundraiser is running until September 15. (I did not expect to meet my goal in a single day.) I am still happy to accept donations, of course, and there are various neat prizes to be had, as you’ll see if you check out the Kickstarter page. So while I’ll still exhort you to tell your friends, and donate if you can, it doesn’t have quite the sense of urgency I’ve anticipated.

I get to write this book. It will be awesome. Full of monsters and heroism and betrayal and sand and sharks and lava and resort hotels and possessed people and dispossessed gods. Thanks to everyone who made it — who are currently making it! — possible for me to continue this series. I couldn’t be happier.