Start Your Morning with a Giant Eel

It’s Monday, and that means: a new chapter of Grim Tides! Chapter 3: “A Conversation with Koona.” It’s about Marla and Rondeau visiting an oracle. I love oracles. Go, read, tell your friends if you like it, etc.

One nice thing about doing a serial novel is it encourages me to update here at least weekly.

I tend to link mostly to book or magazine-related Kickstarter projects, but I do have other passions, like gourmet popsicles: so consider supporting the Little Bee Pops kickstarter. A delicious small business!

My wife Heather Shaw, who used to edit erotica magazine Fishnet, tells me that one of the authors she frequently published there has an erotica e-book collection for sale: Four Fantasies by Matthew Addison. (The cover features, like, stockings and part of a butt, so don’t click if you’re someplace where viewing such things is a problem.) Apparently it’s hardcore and literary with some fantasy elements, so if that’s your boat, go float it.

I broke 75K on my current novel-in-progress on Sunday. (I can’t tell you much about the book; it’s pseudonymous, but I may be able to out myself as the author in the future.) Another eight (or maybe ten or twelve) thousand words will finish off the first draft, I think, so it should be a book this week! Of course, it’s an unusually messy book, but I’ll have the rest of the month to clean it up.

A wonderful weekend! Our friend Anne came over and hung out with us on Saturday, out in the back yard (the weather is essentially summer-like here, it’s bizarre), then stayed for dinner. That was great fun. On Sunday morning, I took the kid out to a playground, where he rode his tricycle in furious Mister Toad style, and we played chase (which is like tag but less, uh, formal?) and played in the sandbox. Afterward we encountered some local kids with a lemonade stand. (Yeah, in January. See above re: summerlike.) The boy was just captivated by the notion of having a lemonade stand, so his mom helped him make lemonade in the afternoon, and we played lemonade stand in the kitchen. (Me: “Can I have some lemonade?” Him: “It costs money.” Me: “Here’s a nickel.” Him: “No. 75 cents.”)

Beautiful weather, good friends, time with my wife and kid, and about 9,000 words of writing. That’s pretty much all I want out of any weekend ever.

The sixth full-length Marla Mason novel, Grim Tides, is being serialized online! The first two chapters are up now.

If you don’t want to wait, you can buy the Kindle version of the whole book now.

Of if you prefer a different flavor of e-book, you can get the epub version at Barnes & Noble.

Enjoy the novel! And thanks to everyone who supported me. I couldn’t have done this without you.

The Grim Tides Kickstarter is done! I raised $11,241.00. That’s a pretty good advance, you guys. Better than I’ve gotten for any of the other novels I’ve sold in the past few years. Thanks to everyone who donated or spread the word. I am so happy to be writing more about Marla, and getting paid for it. This will help with the kid’s preschool tuition and pay down the ever-present hospital bills, and we should be able to take a bite out of the family debt. (And have a nice meal or two as well.) Life is good!

Last night I crossed 20,000 words on the first draft of Grim Tides. Since the Marla novels run around 85,000 words, that’s pretty much a fourth of a book! Since it seems likely the whole thing will be written by the time I start serializing it in January, I may update with two chapters a week instead of one, on Mondays and Wednesdays. So the whole thing would be posted over three months or so, instead of six. What do you think?

This is a big day:

The Kickstarter for Grim Tides ends at a minute before midnight tonight. This is it. Now or never time. (Well, okay, I’m sure I’ll have a PayPal button up when it’s serialized, for anyone who wants to give then. But why wait?)

And: My new book Briarpatch is out today (in theory; it’s still listed as pre-order status at some sites, but order it anyway, and it oughta be along soon). You can order a copy at Amazon or Powell’s or a bunch of other places. Please do. This is my baby. Most ambitious thing I’ve ever published. I want people to read it.

And: Quarterly estimated taxes are due today. Farewell, savings account! Nice knowing you!

In the Marla Mason books, there are characters who can summon oracles to answer questions, provide direction, and interpret prophetic dreams — all for a price, which varies from the minor to the major, depending on the magnitude of the service rendered.

They are crazy fun to write.

I’ve had a minor god of disease emerge from a trash can, a ghost in a drain, a demon named Murmurus who demanded old books in exchange for answers, and the djinn from my story “Unfairy Tale” summoned from a jar of ancient wine, among others. In Grim Tides so far I’ve got a dark sea-god in the form of an immense puhi (moray eel), and I think I’m going to drag up the disemembered ghost of Captain Cook pretty soon, specifically to warn about an invasion by outsiders. I’m hoping to work in a third oracular appearance (threes are always good), possibly one where the summoner gets a MUCH bigger supernatural figure than they wanted or expected — maybe Pele, or Lono, or Uli.

I just love the opportunities for weirdness presented by these oracles, and they’re good for setting things up in the plot — and cryptic foreshadowing is my favorite kind.

Gettin’ My Stroll On

Busy weekend. I had lunch with Nick Mamatas on Saturday, then interviewed him for a future issue of A Certain Magazine. It was my first time interviewing an author (though I’ve sat in on a few interviews), and I think it went all right. Nick doesn’t hesitate to voice strong opinions (I know! You’re shocked!), which helps.

Heather took our son to the circus that morning, so when they got back in the afternoon, I gave her a reprieve from parenting, and the boy and I went for a long walk, stopping for ice cream cones and then trekking to Totland in North Berkeley, where he played with appropriate frenzy. (I realized later that, with the trip to lunch and back, and to Totland and back, I walked seven miles on Saturday. I like walking.)

We went to the Solano Stroll on Sunday. (It’s a fairly epic street fair.) The kid rode lots of rides, and rode his first pony, and we all ate the sort of food that one generally enjoys in the moment and only later comes to regret — garlic fries, Italian sausage, greasy pizza slices, etc. Heather’s Aikido school was there, so she and the kid did a fair amount of flipping around and somersaulting on the mat while I finished reading Hunter S. Thompson’s The Curse of Lono. (I might have to give his Samoan war club a cameo in my next novel.) A pleasant afternoon all ’round.

Didn’t write a ton (obviously, being busy), but I managed to finish chapter four of Grim Tides. This book has my favorite villain ever.

And speaking of: only three days left for the Grim Tides Kickstarter. Prizes, people! You can get prizes!

The good people at Kickstarter have made Grim Tides the Project of the Day today, which is very cool. Only six days to go. (So if you’re sick of hearing me talk about the Kickstarter — I’m almost done!)

I wrote another couple thousand words of the book last night, and now the first three chapters are done, at least in lumpy first drafts. Last night I set up some truly vicious villain stuff. My general goal is to do at least a thousand words a day during the week, and 2k a day on weekends. As long as I can average about 10,000 words a week, I’ll be happy — that would be a draft by Halloween, basically, and it’s a non-murderous pace. It’s so fun to be back in this world, playing with these characters again, and making their lives miserable.

I finally found a way to use a villain I’ve been mentioning in the novels for years, so that’ll be fun. It’s a big bad as dangerous as the Mason from Broken Mirrors, but with a radically different personality and approach.

The only downside is, writing this book makes desperately want to return to Hawai’i, which I can’t afford (in terms of time or money, really) just now. Oh well. I’m planning to take my wife on a vacation there for her (mumble) birthday in 2013, so it’s something to look forward to.

Lindsey is no stranger to Marla. She works in the studio with my longtime artist Daniel Dos Santos, and actually collaborated with him on the new covers for Bone Shop and Broken Mirrors, created for the audio editions.

Lindsey’s a fan of the books, and she’s excited to be working on the project. I’m confident she’ll do great artwork. Thanks to all who donated for making this possible!

You can now download the audiobook versions of Bone Shop and Broken Mirrors at Audible.com! Go forth and buy! (If enough people do, maybe they’ll publish Grim Tides too when the time comes…) 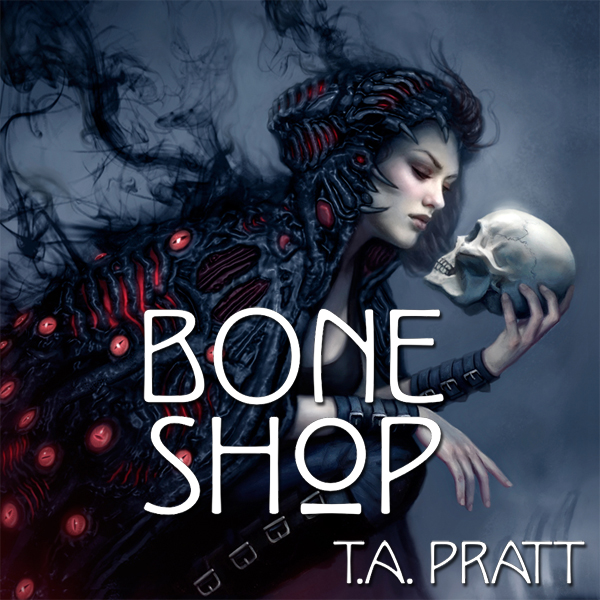 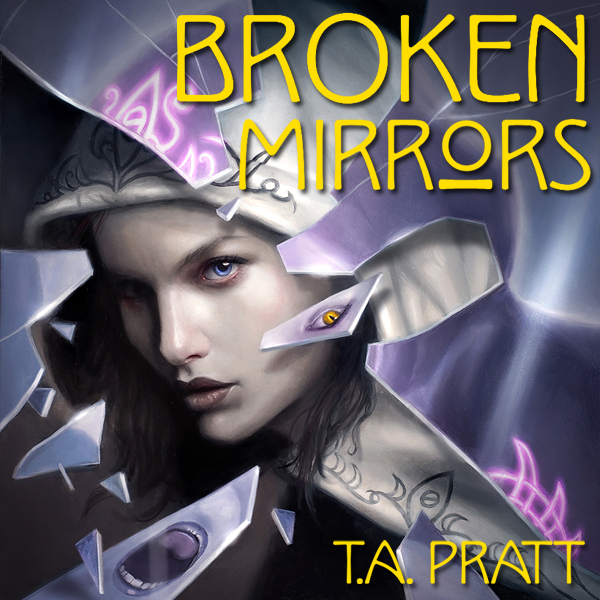 I broke $10K in my Kickstarter fundraiser for Grim Tides over the weekend. (Holy crap. And thanks to Kevin Hogan for putting me over the top.) So that means I’ll commission original cover art; once I confirm that the artist I have in mind is still available and interested, I’ll announce details. Whee!

Nine days to go. Lots of prizes still to be had. Can’t wait to see what the final total turns out to be!

Over the weekend I wrote the first chapter of Grim Tides (and half of chapter three, because I wanted to write about my villains a bit), and I’m really pleased with how it’s going. Murder, wave-mage hive-mind surfer/sorcerers, a magical bookshop with kleptomaniac tendencies, a giant eel oracle, the return of Marla’s valet Pelham… and that’s just the first couple chapters. This one’s gonna be fun.