State of the GAHHHHH

It’s been a weird week — the kid’s doctor visit, mid-week trip to the zoo, being awake in the middle of the night with the aforementioned kid the other night, and etc. I’ve been feeling generally discombobulated and unproductive all week, with my evenings spent mostly playing Batman: Arkham Asylum and watching DVDs with the wife (United States of Tara, Californication) and reading some K.J. Parker and William Gibson and assorted graphic novels.

This is bad, because I have simply epic levels of work I need to do — like, I need to produce 80-90,000 words in the next two months. If I can write 20,000 words this weekend, I’ll be where I want to be… but that’s unlikely. I’m hoping to write 10K. But I don’t know if I’ll manage it. I’ve been in deep denial, I think, about this upcoming deadline. I’ve been doing some other work — wrote a story last weekend, and have been doing some anthology stuff I can’t really talk about yet — but I haven’t touched the novel in weeks. That has to stop. Or, rather, I have to start. I’ve never missed a deadline for a book — I’ve never even been late — and I don’t intend for this to be the first one. It’s a bit daunting. It’ll be less so once I build some momentum and start getting some words down. I’ve just slipped out of the groove, I think. Anyway — wish me luck. (Especially since I want to revise my middle grade novel this weekend, too, because I’ve been procrastinating on that, and will work better on my big project if I clear the decks first.)

I neglected to mention that my short SF story “On a Blade of Grass” is up at Escape Pod, in both print and audio form. Parasites and interstellar warfare!

The latest installment in the Alphabet Quartet is up at Daily Science Fiction, too. Go read “C is for Crate” by yours truly, Heather Shaw, Jenn Reese, and Greg van Eekhout.

Good news! We took our kid in for a pressure test to assess the state of his glaucoma, as we do a couple of times per year… and for the first time we didn’t have to do it under anesthesia. He’s old enough now for us to talk to him, explain to him what’s going on, and reassure him, so we decided to try it with his opthamologist in the office. He did beautifully — didn’t cry or freak out at all, or even seem particularly afraid. His pressures are well within normal range, which is fantastic news. So what’s normally an all-day ordeal with going to the hospital in San Francisco, waiting for doctors, getting him anesthetized, waiting for him to come out of anesthesia, etc., was instead accomplished in less than an hour at the office a few miles from our house. This is a huge benefit for us. (And, also, vastly cheaper, since we don’t have to pay an anesthesiologist.)

One eye seems stronger than the other, so he’ll have to wear an eyepatch for a few hours a day for the next few months, at least, to make his other eye stronger. But it’s a lot better than surgery, eye drops, etc., which we’ve endured often enough in the past.

Since he was so good, I took him to the zoo, where we rode the train, and various kiddie rides, and looked at camels and zebras and giraffes and meerkats and so on. He’s sitting on the couch now with his zoo map, pointing out all the stuff he did. Such a cutie.

Things I Wish My Elderly, Incontinent Cat Would Stop Peeing On

What I Learned at Clarion

(As suggested by Jim Kelly.)

It doesn’t matter how cool and awesome your ideas are if you can’t present them in a clear and comprehensible fashion.

Being clever for the sake of being clever isn’t a good idea if the clever bits interfere with the story you’re trying to tell.

Trying to think about “plot” and “character” (and even setting!) in isolation isn’t much good. They rely on complex interactions and are inextricably entwined, and you can’t change one without affecting the other(s). For example, once you really know a character, and understand what they’d do in a given situation, the working-out of the plot largely takes care of itself.

Try to write about stuff that matters to you, and embrace your weirdness, your idiosyncracies, and your obsessions. That’s where your individual voice comes from.

(I could have written a list with a lot more “Don’t drink that much tequila,” and “During watergun fights, avoid hiding in patches of poison ivy,” and “Fred means you no harm — probably,” but I figured I’d focus on the writing stuff.)

The Clarion Writers workshops http://clarion.ucsd.edu/ and
http://www.clarionwest.org/ are now taking applications. So maybe go to one and learn some stuff. I sure did.

My story “A Void Wrapped in a Smile” just sold to newish online magazine Basement Stories, so look for that in their fourth issue. It’s a Marla Mason story, sort of, though Marla only appears in a scene or two. It’s mostly about Joshua Kindler, a secondary character in Poison Sleep, exploring why he was the way he was and why he did the terrible things he did. It’s meant to be standalone story accessible to new readers, though if you’ve read PS it may have extra resonances. It has one of the coolest fantasy elements I’ve ever devised.


It’s Wednesday, and that means: You can read “B is for Banyan Tree” on the Daily Science Fiction website, the latest in The Alphabet Quartet series. (Subscribers got “C is for Crate” in their e-mail today.)

Life is a busy boiling cauldron of busy-ness. I need to finish up a short story this weekend, write another story next month, work on a book proposal this week, do some last revisions to my middle grade book so my agent can start sending it out, continue work on the novel in progress (due April 1!), write a foreword… I may need to make a to-do list. Possibly in multiple colors indicating triage priority levels. It wouldn’t be so bad, but we’re finishing up the monster February year-in-review issue at work this week, so I’m pretty exhausted when I get home, and won’t get a day off until Friday (at least, I hope I get to take Friday off). Things should calm down after tomorrow, though, and I can get back on track.

All this work is severely cutting into my Xbox time.

No, actually, I’m okay, apart from being at crush depth in the dreaded Deadline Sea. But my story “Terrible Ones” went up today at Podcastle for your listening pleasure (especially pleasurable because the one and only M.K. Hobson did the reading). So go enjoy.

Hey! It’s roundabout midway through another week, which means there’s another Alphabet Quartet story for lucky Daily Science Fiction subscribers, “B is for Banyan Tree”… and those of you who don’t subscribe can read last week’s “A is for Arthur” on their website! This is less flash than a bona fide short story, and the others are much shorter — we just figured we’d start you out with a bang. (By “we” I mean me and my co-conspirators Heather Shaw, Jenn Reese, and Greg van Eekhout.)

I just signed contract for an indie filmmaker to do a short film of my story “Morris and the Machine”; I’ll say who it is when I can. (He wants to get his website updated so I can point you all toward something pretty.) He’s very passionate about the story, and has made some cool genre short films before, so I’m excited.

I’ve been working mostly on a Project That Must Not Be Named, but it’s due in April, so you won’t have to endure more than another ten weeks of occasional cryptic comments, fear not. It’s keeping me occupied, and has some interesting challenges. Once it’s done, I start writing my Pathfinder novel, which I can reveal is tentatively titled City of the Fallen Sky. That’s maybe my favorite of any title I’ve ever come up with for any book.

Let the Torrent of Words Begin

First: I got the okay to announce that one of the new book projects I’m doing is a fantasy roleplaying game tie-in novel for the Pathfinder campaign setting. They don’t want me to say much about the plot or specific setting(s) yet, so suffice to say: it will be awesome, and I looooove my characters. Playing in somebody else’s sandbox occasionally is fun, and I’m delighted to be dipping my toe into secondary-world fantasy again, especially in such a rich and varied and pleasantly weird game world.

Second: Today is the day The Alphabet Quartet, the suite of 26 flash stories I wrote with Heather Shaw, Jenn Reese, and Greg van Eekhout began running in Daily Science Fiction. If you were a subscriber to DSF (which is free), you would have gotten our first piece, the extra-long “A is for Arthur,” delivered magically to your inbox. It’ll go up on the website for all to read in a week or so, but why delay your gratification? Sign up if you haven’t, and prepare for six months of mythic creatures, robots, superheroes, poignancy, surrealism, monsters, literary gamesmanship, jokes, sex, and willful strangeness at the rate of one story a week.

I’m home with my sick kid again. He’s still got a slight fever and cough and a nose that runs like a faucet, but for all that he’s pretty cheerful, especially with some baby tylenol — or “red medicine” as he calls it — in him. Too sick to go to preschool, though, so here we are, watching Dora the Explorer and playing with little toy cars.

Like his mother, my son is oddly beautiful when he’s sick: skin very pale and luminous, eyes bright yet shadowed.

Here’s a set of recent photos of the little guy, from the past couple of weeks. No beautiful pallor here, though — healthier times! 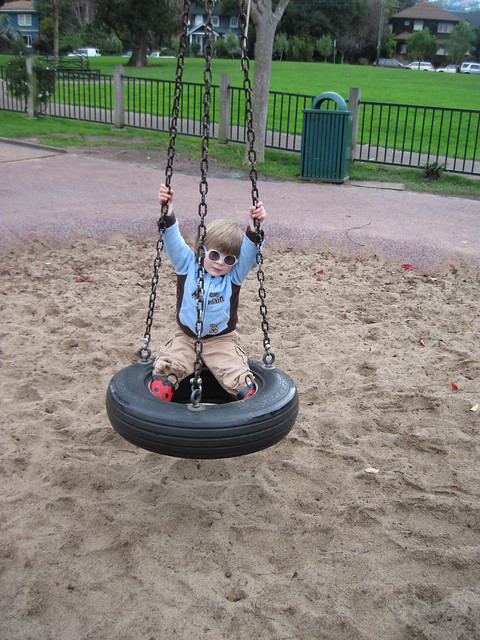