21 and Done. Or, Alternately, Sweet Sixteen.

I had a busy weekend. A pleasant one. Friday night our dear friend Susan, visiting from New York, came over for a few hours of conversation and take-out food. So nice to see her! It’s been literally years.

Saturday, my wife and son took off for Tahoe so the kid could play in snow for the first time. I wish I could have gone! But I am in a world of deadlines. So I stayed home and wrote a large number of words instead. So many words. But I did not finish the draft of my novel in progress, and indeed, I soon realized I was writing a whole lot of words I would have to throw away, because my climax was stupid and terrible and all wrong. I could feel it, but I just kept on writing my way through, figuring I could get some of the falling action right, at least.

Sunday morning we all headed for Mama’s Royal Cafe to have brunch with Susan and our friend David and his girlfriend Meredith (who impressed my boy with her origami skills). Yumminess and good talk ensued, and the kid was very well-behaved, which is impressive considering we had a long lingery meal. I took the boy away afterward so Heather and Susan could hang out.

The kid wanted to see a new playground, so I found one online we hadn’t been to yet, and we drove up. It was a pretty decrepit old playground, really — swingsets with no swings, a nearly 80-year-old clubhouse all boarded up, blocked off, and in dire need of repair — but it had some really pretty trails, too, and nigh-infinite numbers of steps switchbacking along the path of a creek with lots of little waterfalls. We hiked up and down and all around until we got bored, then drove over to Codornices Park, home of a giant concrete slide. My kid has done the slide many times before, always with me, sliding down together. This time, he wanted to try it on his own. And, lo, he went down the slide a bazillion times! We also stomped through some creeks and went through the tunnel to the rose garden and so on. Good clean exhausting fun.

Once we got home, I wrote some more, completing the falling action and figuring out how to fix my crazy broken climax, then going back and writing that. So that’s the draft of my 21st complete novel. It’ll be my 16th published novel in seven years. (I’ve got four trunk books that will never see print, and another that’s still out on submission. I have a few books under pseudonyms that aren’t listed on my website. My bibliography is best described as “it’s complicated.”) It’s been a busy almost-decade.

I also read Stephen King’s The Wind Through the Keyhole, which is very enjoyable. It’s The Dark Tower 4.5, an interstitial book that has no bearing whatsoever on the series as a whole, and it’s actually a story-within-a-story-within-a-story. The most deeply-nested story is an awesome standalone short novel, and the rest of it is pretty pleasant too.

So that was my weekend. Not too bad at all.

Reading in Berkeley this Sunday

I’ll be reading and blathering at Other Change of Hobbit (my neighborhood bookstore, and one of the great specialty science fiction shops around) this Sunday, from 4-6 p.m., with Claude Lalumière and Camille Alexa. (Other people are reading from 2-4, as you can see if you go to the website — it’s an all-afternoon extravaganza!)

Other Change has had some financial problems lately — they were closed for the past few months — so this event is meant to bring in some traffic and help them keep the doors open. Please come! Tell your friends. They have great books (new and used) and cute cats. What more can you ask?

Venom In Her Veins Release Day

Happy Book Day to me! My Dungeons and Dragons/Forgotten Realms novel Venom In Her Veins is now available for sale.

Buy it at Powell’s

Or the indie store of your choice.

The week in Los Angeles was a rousing success. I wrote 42,000 words in six days. I’m not sure if that’s a personal record or not, but it’s definitely up there. (I didn’t write on Saturday during the train ride home, confining myself to reading and watching cartoons and staring at the passing scenery. I needed a break.) Jenn Reese and Chris East are the best hosts ever.

But enough about the next novel! Let’s talk about the last novel!

I just got the artwork for my Marla Mason novel Grim Tides, painted by Lindsey Look. This image will appear on the cover of the print version, and the audio versions from Audible (I think), and the e-book version, once I get some text on it. It’ll likely be on the bookmarks too. 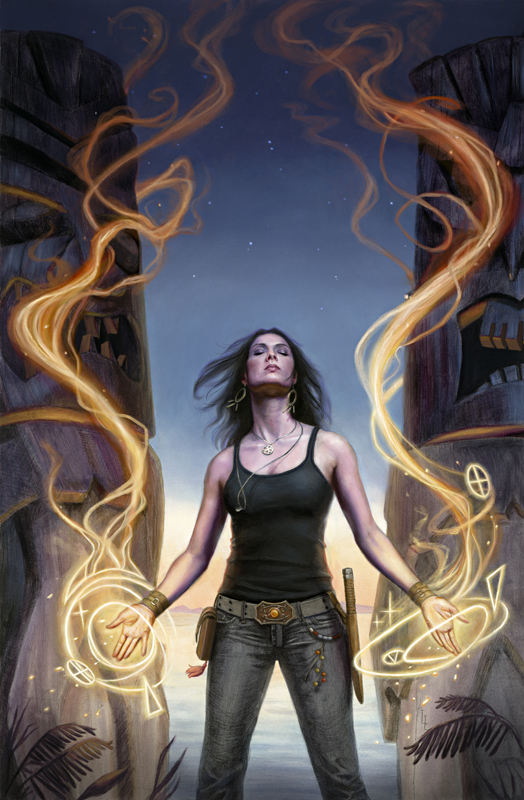 I am in Los Angeles! (And have been here since around 8:30 on Sunday evening, when my train, the Coast Starlight, rolled into town.) I am safely and cozily ensconced in the home of my friends, writer supercouple Jenn Reese and Chris East. (Jenn’s new book Above World is available for sale now, so go buy it!.)

They kindly agreed to let me hide out in their house for a week so I could obsessively focus on getting some words down on a work-for-hire novel I’m doing under a short deadline. I’m hoping to get the novel halfway drafted, which seems doable. Sunday through Wednesday I managed a total of just over 25,000 words, and I’ve got today, tomorrow, and Saturday on the train to produce more. It’s going well, I’m having fun, and etc.

I can’t write all the time, of course, so there’s been a bit of socializing and reading and introducing Jenn to the wonders of Adventure Time. So far there’s only been a single day where I stayed in the apartment without venturing outside. I’ve had a couple of nice meals with Jenn, and we might go see a movie, and I’ll do dinner with both Jenn and Chris on Friday. (I catch the train back to Berkeley on Saturday morning.)

I’m more than halfway done with my writerly retreat. Sad! But also okay, since I miss my wife and kid terribly. This is Thursday, which is usually my day off to spend with my kid, and instead, he’s in preschool. It’ll be good to see my family again. Especially if I can have 30+ thousand words of a novel behind me.