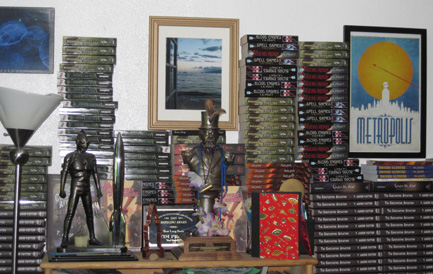 You see the piles of books in that photo? That’s just a small selection of the tottering heaps of my books I have in the house. They make for good insulation, I’m sure, but I wouldn’t mind getting rid of a few, ideally making some money to buy Officeboy Xmas presents in the process.

Here’s where you come in: Buy my books! (They make great gifts. Even if just for yourself.)

You can get signed and/or inscribed copies for cover price (I’ll round up to destroy any stray pennies), plus $4 shipping per book for mass market paperbacks and $6 each for trade paperbacks/hardcovers.

Write to timpratt at gmail dot com or post in the comments here saying what you want and telling me if you want them signed and/or personalized. I’ll do the math and tell you what you owe me and where to send the PayPal money. First-come, first-served, which is why you should comment or e-mail instead of just sending money — I’d hate for you to pay for something that sold out. (First-time comments are moderated here, so don’t worry if your comment doesn’t show up immediately.)

I’ll run the sale for one week, from Monday October 29th until Sunday November 4.

I also have eight or ten copies each of rare Marla Mason story chapbooks Shark’s Teeth and Snake & Mongoose, which I’ll sell for $8 each (shipping included).

Hardcover of The Constantine Affliction (as by T. Aaron Payton), $33 (16 copies)

Trade paperback of The Strange Adventures of Rangergirl, $18 (11 copies)

Mass-market paperback of Forgotten Realms: Venom In Her Veins, $12 (20 copies)

Trade paperback of anthology Sympathy for the Devil (edited by Tim Pratt), $22 (4 copies)

Paperback of poetry collection If There Were Wolves, $14 (2 copies)

Trade paperback of collection Little Gods, $20 (Not the first edition that includes the poems, but the more attractive offset edition) (12 copies)

That’s it. Make your wishes known.

This site uses Akismet to reduce spam. Learn how your comment data is processed.